What is Professional Negligence?

Professional negligence can be defined as a breach of duty between a business professional and their customer or client. 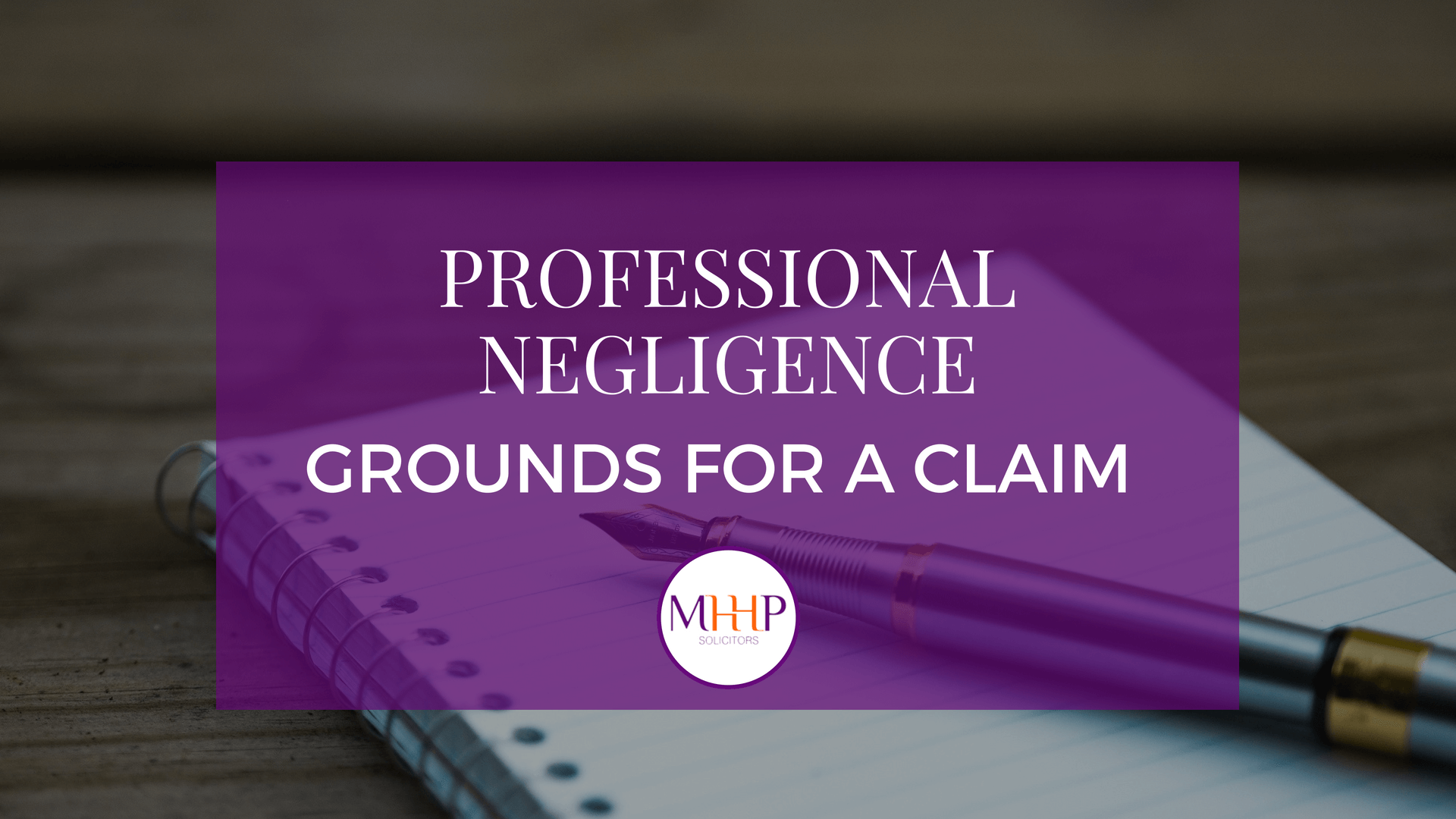 Understanding whether or not you have a claim

In order to establish a claim in negligence against a professional you will need to demonstrate that the professional owed you a duty of care, that he or she acted in breach of that duty of care and finally that the breach has resulted in you suffering a financial loss or injury

Generally speaking, a professional is likely to owe a duty of care to a client he is instructed by. The law in this area is complex; however a Solicitor should be in a position to advise you in more detail

2. Breach of Duty of Care

A professional who owes a duty of care will have acted in breach of that duty if they have failed to provide their service to a reasonable standard.

Also, your loss may have been caused by a combination of events and the Professional’s Negligence may only have been liable for one of those events.

Sometimes a professional may not have acted negligently per se but may have acted in an unethical manner or in a fashion that is contrary to his or hers professional code of conduct. In those circumstances we can assist you in pursuing a complaint to the relevant regulatory body.

Categories of professionals frequently claimed against​

In our experience, solicitors are often claimed against for the following reasons:

Common reasons for pursuing a Claim against a barrister may include the following:

The vast majority of Accountants provide their services in a competent and reliable manner; however, the following could give rise to professional negligence claims against an accountant:

A claim could arise where a broker or firm has failed to provide the cover promised to a customer – resulting in financial loss.

We have seen claims against surveyors in the following circumstances:

We live in a world where IT / Internet security has never been more of an important failure to provide adequate security in a timely and professional manner could result in significant financial loss to yourself or your business.

This list is not intended to be exhaustive by any means. Claims may be made against professionals from a wide range of different industries and professions.

If you feel your claim is legitimate, can gather the necessary evidence and you’d like more information from us then do contact us for some initial free advice

How do I start the process?

In English Law, Pre-action protocols must be complied with before a claim is filed with the Court.

First, you should send ‘Preliminary Notice’ to the professional you are intending to claim against. This notification should set out the reasons for the claim as well as the financial losses you consider you have suffered. The opposing party must acknowledge this letter and respond within a reasonable time frame.

What time-constraints are involved?

Usually, claims must be filed within 6 years of the date the professional negligence took place. However, this may vary depending on the facts of your case.

After having pursued the Pre – Action protocol you may feel you have little choice but to issue proceedings at Court.

The decision to issue Court Proceedings is not one that should be made lightly. Before issuing proceedings you should always check with your Solicitor and legal team that you have a reasonable chance of succeeding. This is especially important as Court proceedings are uncertain, lengthy and expensive.

If the thought of court proceedings sounds unnerving, it might be reassuring to know that most cases are settled before they reach a final court hearing. At MHHP Law we advocate settlement at an early stage, if possible.

We are experienced at resolving disputes for clients and to that end you may be interested in considering some of the ways we achieve this.

ADR is an umbrella term that describes various techniques that may be adopted to resolve a dispute prior to a final/trial hearing.

Forms of ADR may include the following

Negotiation involves the parties, often with the assistance of a solicitor attempting to reach civil agreement on matters in dispute

Mediation is the process whereby parties, with the assistance of a neutral third party ( the mediator) explore the options for resolution and attempt to reach agreement

All parties may agree to attend a meeting with their respective legal teams with the aim of trying to resolve matters once and for all.

There are many benefits to resolving a matter outside of the formal Court Process which include:

Will I have to attend court?

We completely understand that the thought of standing in a court room is a nerve –wrecking experience. We do our upmost to avoid confrontational litigation as most cases do settle. In advance of a final hearing

What costs are involved and how can I seek funding for my claim?

With every case being unique, the answer to this question, in short, is simply that the cost depends on the complexity and severity of claim.

Legal Costs in contested matters can be very high. You could meet these costs yourself. Alternatively, other options may be available to you for example; Loans are sometimes available for funding legal action. As solicitors we cannot advise on specific loans or financial arrangements; however some of our previous clients have made use of NOVITAS – a specialist provider specifically set up to offer assistance with legal costs.

If loans are out of the question, then Crowdfunding may be a great route to explore and is growing in popularity.

For any other information or help on a potential professional negligence claim please feel free to discuss this with our highly trained solicitors, or on 020 3667 4780.