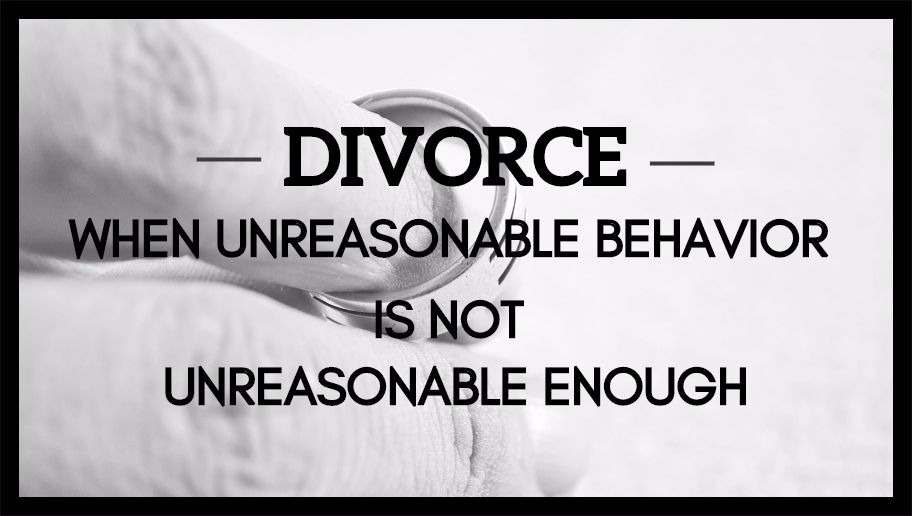 Obtaining a divorce is England and Wales is relatively procedural. If you can establish one of five facts, you can lodge a divorce petition with the court. These facts are:

- 2 years separation with your spouse’s consent

Unreasonable behavior is frequently relied on as it is one of two facts (the other being adultery) that entitle grounds for divorce proceedings; once you have reached the conclusion the marriage has broken down – be that through a resolution with time apart or a mutual agreement. Despite calls for reform of the law and a “no fault” divorce, there appear to be no plans to change the fault based on the fact of unreasonable behavior for the foreseeable future, parliamentary time will no doubt be taken up by Brexit.

An example of this is the much publicised recent case of Mrs Tini Owens has led to judicial scrutiny of what amounts to unreasonable behavior. Mrs Owens sought to rely on her husband’s unreasonable behavior but her petition was simply dismissed by the Judge who found that the allegations Mrs Owens sought to rely on against her spouse were “minor altercations of a kind to be expected in a marriage”.

Mrs Owens appealed, but the Court of Appeal refused to interfere with the previous decision by stating that “Parliament has decreed that it is not a ground for divorce that you find yourself in a wretchedly unhappy marriage though some people say it should be”.

Mrs Owens has now been granted permission to appeal her case to the Supreme Court, a decision welcomed by many including Resolution - the leading organisation for family lawyers committed to the non-confrontational, support and constructive resolution of family matters.

Pending the outcome of Mrs Owens appeal to the Supreme Court along with further guidance, it’s no doubt that family lawyers relying on the ground of unreasonable behavior will be at pains to ensure that the petition is drafted in a manner that is unlikely to be construed as “minor altercations”, and instead be seen as serious issues for irretrievably broken down marriages.

The Owens case also raises an interesting point of law as Mrs Owens’ distinguished legal team are to argue that the terms of the statute ( S 1(2) (b), MCA 1973) does not in fact require Mr Owens’s behavior to be unreasonable but rather that Mrs Owens cannot be reasonably expected to live with Mr Owens.

At face value, this is certainly the case as the statute states “that the respondent has behaved in such a way that the petitioner cannot reasonably be expected to live with the respondent”. It will be interesting to see how the Supreme Court deals with this argument, particularly for a marital relationship that has broken down.

Mrs Owens case certainly underlines why divorce law in England and Wales is ripe for reform. No-one should be forced to stay in conditions that invoke a “wretchedly unhappy marriage".

For expert legal advice on Family Law, help or any information on our services, please contact Tayo Taylor at MHHP Law Solicitors on 020 3667 4783. We offer a Free 30 minute consultation which you can enquire about through our website’s contact page.